Blog: Is Cash Management Your New Hotspot for Cost Savings?

With the seismic shift and upending of everything as we know it recently, we’ve seen many different strategic approaches taken by those within the industry. Some financial institutions have taken the opportunity to really go back to basics and put the customer at the heart of their operations, as they look to pivot their strategies for the future. Others have leapfrogged ahead with their digital strategies, accelerating innovation plans as consumer habits shift during this period of continued flux. But regardless of these different operational manoeuvres, one thing that has remained patently clear recently (and as we look to the future), is the important role financial institutions play as public utilities.

With this is mind, how do financial institutions strike the right balance between satisfying the current and future needs of customers alongside meeting the real challenges of today, with the increasingly tight squeeze on delivering cost savings and business efficiencies? For long term success the answer of course has to be to deliver what the customer actually wants. The only way to achieve this is to create a service offering which truly adds value to the consumer, supported by an economically viable long-term business model. This is easier said than done, with most banks built on layer upon layer of legacy technology and infrastructure. Therefore identifying cost savings hotspots is an absolute necessity for most financial institutions today.

Could effective cash management be one of these highly coveted untapped hotspots? Despite a rise in digital banking, consumer demand for cash remains constant. Digital only customers are in the small minority and so for most countries and companies, cash still remains an important payment option, with over $18 trillion cash and cheque transactions occurring annually and over $43 billion notes in circulationi. But handling this cash does not come cheap, and whilst there is cash in the system there will always be costs – with recent estimates showing cash handling topping over $300 billion of costs for the industry each yearii.

Charting a new course for cash management has become critical, but how do you get the balance right when the status of cash varies between each country - particularly between developed and developing countries? In South Africa one of the main issues with cash is managing the vast quantities of cash used in circulation, with most consumer transactions still made using cashiii. Conversely in some ‘non-cash’ societies we’ve seen cash tendencies drop much lower, with the value of cash in circulation dropping low in some countries like Swedeniv. There are also other countries in between these extremes, for example the UK where maintaining access to cash is a critical ongoing focus for the government.

To look at how financial institutions can unlock optimum savings from this hotspot, it’s worth looking at the key drivers for implementing cash management in the first place. Some of the biggest challenges when managing cash include transportation and handling costs, ATM out of service costs, reporting and reconciliation, fluctuating customer demand and manual processesv. Interest rates and the threat of attacks are also significant drivers for change, with retailers in South Africa requiring additional security to combat the threat of armed robberiesvi.

Consequently, finding ways to manage these areas more effectively can deliver significant savings, and it’s for this reason that we’re seeing many in the industry putting cash management at the centre of their retail strategies.

Evidence shows that by taking a more holistic approach to cash and implementing an end-to-end optimisation of cash processes, savings of at least 20% in total cost of ownership can be achieved – alongside delivering better availability for customers and up to a 75% reduction in cash replenishment efforts. This will however of course vary between the cash mature and cash immature markets previously mentioned. Cash is at different stages in different economies and therefore finding that inflection point of efficiencies is where the sweet spot really lies.

As part of their cash management journeys, we’ve also seen many financial institutions continue to embrace cash recycling at the teller line, at the ATM and across the branch. Globally, cash automation ATMs have already reached a satisfactory level for withdrawals, whereas the deposit side offers a lot of potential. Convenient, secure cash deposits are important not only for small and medium businesses, but 24/7 cash-deposit services and direct crediting are on the way to becoming global standards.

In fact, cash deposits effect, on average, more than 50% of the cash handling efforts in a branch. Therefore, the biggest switch for reducing cash management costs is the automation of cash deposit transactions and recycling, whereby essentially your customers are replenishing your ATMs for free. Consumers can then conveniently and safely withdraw that money with no manual handling or transport costs.

As financial institutions look for ways to drive efficiencies and reduce self-service total cost of ownership, the share of ATMs with cash recycling functionality in use continues to increase worldwide. The deployment of recyclers is considered a key part of branch transformation and transaction automation initiatives and we’re also seeing recycling extend beyond the branch to include wider ‘nodes’, for example to include retail outlets in the recycling loop.

Technology is a key lever in the journey to automate and optimise cash. Research shows that IT spend on technology as a total of IT budgets across European and US banks continues to increase, rising from 13% to 33% and 25% to 48% respectively in the last decadevii . However success is not simply achieved by ‘dropping in’ technology; it requires a commitment to innovation - and technology as the enabler for this - really needs to be embraced by the whole organisation.

So how do you bring this all together to drive future success in an increasingly competitive market? Firstly you must identify if cash management could be a cost saving hotspot for your organisation. By taking a more coordinated, automated and technology driven approach to managing the cash in your network, could save you time, remove costs and reduce business risk? If the answer is yes then taking action now could deliver significant efficiencies for the future; alongside optimising the customer journey at a time when being there to fulfil your customers’ needs quickly, safely and conveniently has never been more important. 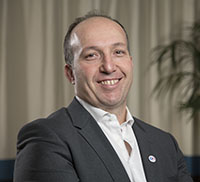